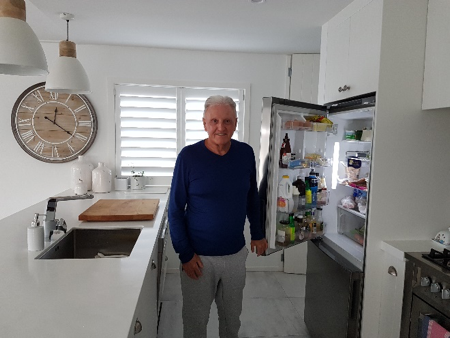 John was randomised into the food and nutrition course. Prior to taking part in the programme, John’s experience of cooking was limited.

John said he found Senior Chef “enjoyable and I think whatever you’re doing, if you’re not enjoying it you don’t want to go next week. Right from the beginning it was produced and developed in a way that made you want to learn.

So what changes have occurred? John said he’s now preparing meals and usually cooking two or three times a week. Shopping at his local butcher he’s now noticed there’s a variety of chicken cuts… “so I ask them well if I bought that type of cut, what vegetables would I put with it? It’s opened up a whole new world for me”.

He also said Senior Chef has given him better insight into what his wife has done over many years: the planning and shopping let alone the preparation that goes into daily meals. And of course, the nutritional aspect is also important and now armed with the information, meals can be planned to take all of this into consideration.

“I guess I can say that all the information, all that I’ve learned at Senior Chef is in my head now and it’s not going to go away”.